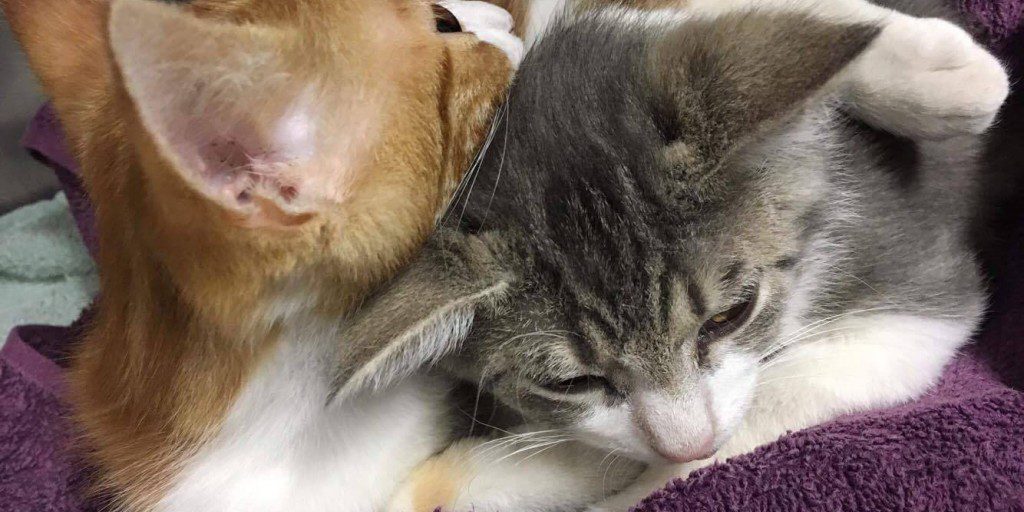 One wet and windy night our vet, Dr Ahmed, received a call from a lady in Darra who had found a cat that she feared had been hit by a car. She gave Dr Ahmed the address but would not touch the cat as she was frightened of it.

When Dr Ahmed arrived he immediately saw a large ginger cat at the roadside, shivering in the rain, he scooped the poor creature up and returned to the clinic.

On clinical examination Dr Ahmed discovered 2 paralysis ticks on Hatoush (the cat’s new name). Due to Hatoush having no microchip, not being desexed, and the sheer number of fight scars on his face and neck Dr Ahmed concluded that Hatoush was a stray.

As tick treatment can be a long, difficult struggle with no guarantee of success we considered euthanasia at this stage but something about this big, battle scarred beast pulled at Dr Ahmed’s heartstrings so he removed the ticks, administered anti-tick serum, and waited.

Our hopes lifted when Hatoush did not pass away through that night so Dr Ahmed administered an antibiotic to treat a suspected bladder infection. Over the next few days Hatoush was monitored and his bladder was emptied manually until he was able to drag himself to the litter box. Hatoush improved day by day until about 10 days after he was admitted Hatoush was able to express his true nature.

Our paralysis subdued kitty cat morphed into a scratching, biting, hissing wild tiger. Again we considered euthanasia as it would be virtually impossible to rehome such a feral, untrusting, and dangerous cat, but once again Dr Ahmed’s heart got the better of him.

Hatoush was given a general anaesthetic, desexed, vaccinated, micro chipped, and had blood taken for a blood test. His blood test came back positive for Feline Immunodeficiency Virus (FIV), the cat version of HIV.

For a final time we discussed putting Hatoush to sleep. We decided that after all he had been through Hatoush, with the heart of the tiger deserved one last shot at life. So day by day we worked on socializing Hatoush by sitting by his cage and chatting to him.

At first when Hatoush was given fresh water and food, and his litter box was cleaned he would back himself into a corner of his cage and hiss and growl. Over time his trust grew to the point where our vet nurses were able to scratch his head through the bars of the cage while he ate. He would growl in mock protest but he would not back away.

Within weeks of gentle coaxing Hatoush began to seek out affection, even from Dr Ahmed, for whom he had developed a deep mistrust of (probably because Dr Ahmed was at the forefront of all of Hatoush’s bad experiences in the clinic).

Hatoush became one of the most loving and affectionate cats we have ever seen (hence the name).

Now, Dr Ahmed decided, Hatoush was ready for his own home, where he would be loved as much as he loved, so he began searching for the perfect forever home for Hatoush.

By pure coincidence one day one of our first clients, Diane, brought her dog, Pearl, into the clinic for a check-up. Dr Ahmed remembered that Diane had owned a lovely cat that she had, unfortunately, had to have put to sleep about a year prior. Dr Ahmed also remembered what a loving cat owner Diane had been. Convinced he had found a perfect home for Hatoush Dr Ahmed approached Diane, and asked how she felt about opening her home and heart to another cat. A somewhat reluctant Diane agreed to meet Hatoush and to take him home on a trial basis.

Just a few short days later Diane informed Dr Ahmed that Hatoush would not be coming back to the clinic for anything other than his veterinary needs, that he would live out the rest of his days in a loving home. Dr Ahmed and all the team were over the moon and so excited that their love and care had paid off for Hatoush (who they all care about deeply).

Hatoush is loving having his own home, his own human, and a warm bed to snuggle up on of an evening. He is even loving his fur sister Pearl, who is not so keen on him but is beginning to warm up to Hatoush’s persistent snuggle attacks.

Dr Ahmed notes that when it is actually time to send Hatoush over the rainbow bridge he may have to outsource to another vet, after all they have been through he is not sure he can be the one to give that final needle.

How to help your pet cope when you return to work after lockdown
June 18, 2020

What you need to know about kidney disease in cats
February 4, 2020

The importance of dental care for your pet
January 2, 2020

What you need to know about preventive care
November 21, 2019